Last week the world held its breath as 33 men emerged from their underground entrapment.  Against all odds, the Chilean government, along with help from many countries, mounted a creative and successful rescue of the trapped miners and we all celebrated together. One headline read: “The Entire World is Joyful”.  Joy.  I think that one word captures the essence of the experience for much of the world.

In our joy and celebration, many noticed the matching t-shirts worn by the miners over their coveralls as they emerged from the mine.  But not many know the story behind the t-shirts.  That they represent the true Joy found in our savior Jesus Christ.

On the front, the shirts read “Gracias Senor – Thank you Lord”.  On the back was Psalm 95:4 in Spanish, translated as “In His hand are the depths of the earth, and the mountain peaks belong to Him.”  See pictures of the shirts in the CNN coverage of this amazing t-shirt story here.

So how did the miners get these matching t-shirts, displaying the true joy of the world?

As Campus Crusade, God guided us to think about how we could help these men and this was how we took the initiative to contact some churches in the north, leaders and authorities about sending the JESUS audio into the mine. It wasn’t easy in the beginning because a lack of a sense of urgency, together with the restrictive control of the rescue team but, God in His sovereignty provided that we were able to gain contact with the daughter and the brother of one of the Christians that were trapped there. 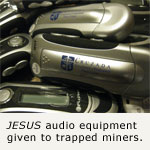 During several weeks, I was in contact with them and I explored the possibility of sending them audio material. Finally, I traveled to the mine with 33 MP3’s containing the JESUS audio version and an ample portion of the Bible. I was there for 2 days and we sent the MP3’s through each of the family members that were there.

Jose Samuel, my contact in the mine, is an extraordinary man who has really surprised me. The psychologists that are giving help from the surface have recognized that he has been a tremendous emotional and spiritual support for the rest of his co-workers.

In return, miner #24, Jose Samuel Henriquez, wrote a letter to Maureira including these quotes:
A few days later, Jose Henriquez contacted Maureira again and asked that the special t-shirts be created for the miners to wear as they came out of the mine, and the whole world got to see the shirts as the miners were rescued one by one.
After the rescue Maureira recaps the experience with this thought, “Chile is a grateful country that has reminded the world to set its eyes on the things of God, who sustains the universe.”  Truly Joy to the World.